Next Saturday’s Valentine’s Day, meaning it’s time for me to share more of my vintage V-Day postcards. 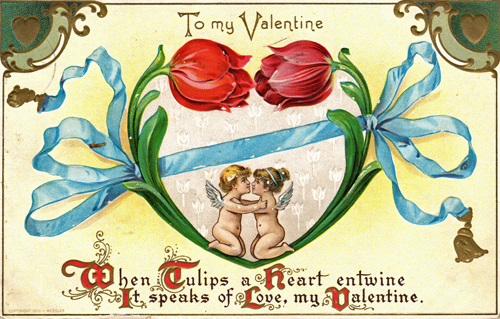 “When Tulips a heart entwine / It speaks of Love, my Valentine.” Mailed to Miss Matilda Blessing of Pitts Pa on February 9, 1910, there’s no message or signature on the back … a secret admirer perhaps? All of the text and illustrations are embossed, even the small field of tulips inside the heart-shaped center.

A very self-effacing lover mailed the next one to Miss Marie Cornell of Dickinson Center, New York in 1930.

“My Valentine / I’m slow, sweetheart. / And shy, tis true. / Yet Cupid loves me – Why can’t you?” This entreaty also was not signed. It’s not embossed, but the colors are still bright, and the scalloped edges shine with glittery gold paint.

Only two inches tall, he was separated from a larger Valentine’s card. The pink ribbon at top is real fabric, and Cupid is swaddled in a soft, folded paper diaper.

Two sweet cupids bring Valentine Greetings. The butterfly wings on the upper one are exquisite! Aunt Bertha sent this postcard to her niece “Dear Little Irene” in 1911. 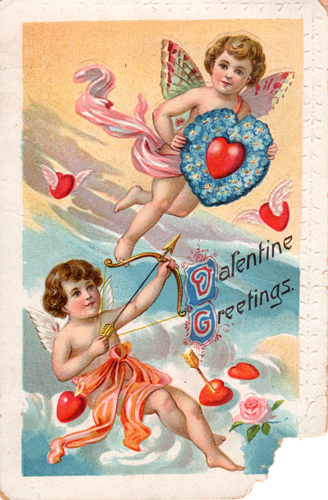 And more Valentine Greetings sent by Mrs Webb of Warners NY, to Mrs Gusta Upcraft of New Haven NY in 1923. Mrs Webb wrote that she is “just recovering from a 2 weeks siege of grip” and closed with “Lots of love, from your friend.”

Finally, a bit of Valentine sass. 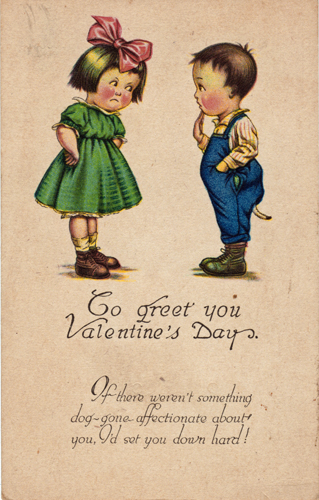 The peeved little girl, a frown on her face and hands on hips, says: “To greet you / Valentine’s Day  / If there weren’t something / dog-gone-affectionate about / you, I’d set you down hard!”

The sheepish little boy looks properly rebuked, and you can see that he even has a little doggie tail sticking out of his cute overalls. With nothing written on the back and no postmark I don’t know what year it’s from or whether the less-than-romantic message was ever sent to a reluctant beau.

Digging into my vintage postcard collection to share some Christmas cards with you, I found two wonderful animal-related cards.

Three fluffy kittens bring you “My Christmas Greeting.” Their expressions are mischievous, you know they just messed with the Christmas tree. The half-border is a gold banner with embossed holly leaves and berries. “Vera” of Waterville Maine mailed this postcard to “Miss Mary L. Nutter” of Palermo Maine in 1911. Her handwritten message on the back: “With best wishes for a Merry Xmas, Vera.”

On a rich dark gold background two beautifully-drawn horses wish you “A Bright and Happy Christmas.” Sweet red flowers – they look like anemones to me – bring a festive feel. This card was sent from Lafayette Indiana to Mr. Edwin W. Savoyer (that’s a guess, it’s pretty illegible to me) of Breinigsville Pennsylvania in 1908, with no written message on the back. 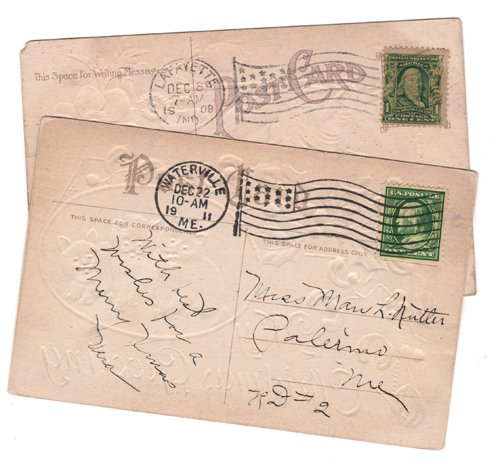 Both postcards have one-cent stamps. Which reminds me – buy your forever stamps before the rates go up in January; the postcard rate will go up a penny to .34 (still a great deal in my opinion).

And have a wonderful Christmas or whatever you celebrate!

Let’s keep it going with my holiday vintage postcard series! Last month I showed you some Halloween cards from my collection. In March, you got to see some fun Easter cards. Valentine’s Day, of course, we celebrated with a Token of Love postcard. And we started 2013 with 3 beautiful old New Year’s cards.

Without further ado, I bring you … Thanksgiving greetings!

A beribboned ear of corn is held aloft by a sweet winged cherub. All that’s written on the back is “From Arlene.” It’s postmarked 1909.

No cherub this young boy. He’s got a nasty little sword, and it looks like he’ll really need it to take down the proud turkey, who’s staring him right in the eye.

It’s postmarked 1913, and includes a chatty message to the sender’s sister, including a little sisterly poke that the reason their mother hadn’t answered her card was that she didn’t put her address on it.

Finally, this quartet of relieved turkeys celebrate a truly happy Thanksgiving, warbling: “Thanks to him who spared our living; We’re here, we’re here till next Thanksgiving.” The entire message on the back says: “Mother”, and the postmark shows it was mailed from Newark, NJ in 1908.

To all of my friends who celebrate, with or with out turkeys (not in our house anymore), have a wonderful Thanksgiving!

Wishing you a Happy Halloween with two scari-licious vintage postcards! Old Halloween cards are relatively rare, as compared to cards sent at Thanksgiving, Christmas, birthday and other holidays.

“The Salem Witch” is a linen postcard featuring a scary witch with her familiars — a soaring bat and the witch’s passenger on her broom, a black cat with arched back and puffy tail — flying across the sky above Salem, Massachusetts. 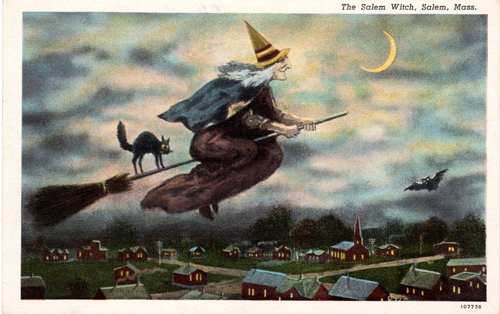 There’s no writing on the back, but it calls for a one-cent stamp, which would help to date it. The card was published by the Curt Teich company, and according to one source is circa 1915 to 1930.

The other card has a message: “Hear the seething cauldron’s din; Throw your strongest potions in — Swiftly bring my love, unseen, Unto me this Hallowe’en!” A brew of some kind of love spell boils in the cauldron over a blazing fire, and three ravens fly across a full moon. Little grinning pumpkin faces parade across the top.

Have a wonderful Halloween everyone!

From my vintage postcard collection, here are two wonderful chicken-themed Easter cards sent to Miss Ada May Rhoads of San Jose, California.  In the first one, three proud hens and a rooster watch over their clutch of eggs…

A beautiful art-nouveau daffodil design adorns the left side of the frame. This postcard was mailed in 1915 from Ada May’s absent-minded but attentive friend in Sacramento, who addressed it to “Baby Rhodes”, and wrote: “Little Sweetheart – I have forgotten your name but I’m writing you just the same. Lovingly, Belle Nick.”

The second card was mailed to Ada May in 1913, with no message other than “From Auntie Jones.” I love the jumble of peeps scampering from an egg in a field of lilies-of-the-valley. I especially value these old postcards that are embossed. On this one, each chick is individually embossed, as are the  flowers, and of course – the jagged edges of the egg.

I spent a happy hour flipping through my vintage postcard collection for a Christmas card to show you, and I found this marvelous “Carte Postale”: 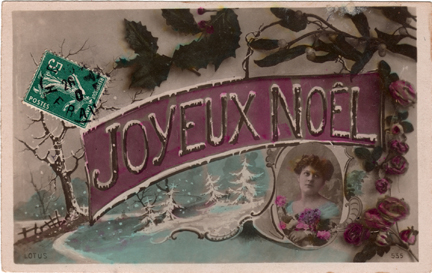 The banner says “Merry Christmas” in French. The adorable mam’selle’s portrait appears to be a hand tinted photo. I think the holly and other foliage around the top and right side are also done photographically, with the snow-dusted winter scene trees and banner drawn in.

A matched pair, this banner says “Happy New Year” in French, with the same pretty lady and background. Neither card has a date on the back, and I can’t tell the year from the cancelled stamps. Interesting that the stamps are on the front. I guess it’s time to resurrect my college French to do some research into when these stamps were in circulation.

No, this isn’t about the character of any of the chickens that we know and love. Going through my vintage postcards, I noticed that some of the little chicks in the Easter cards look kinda angry. Here’s one: 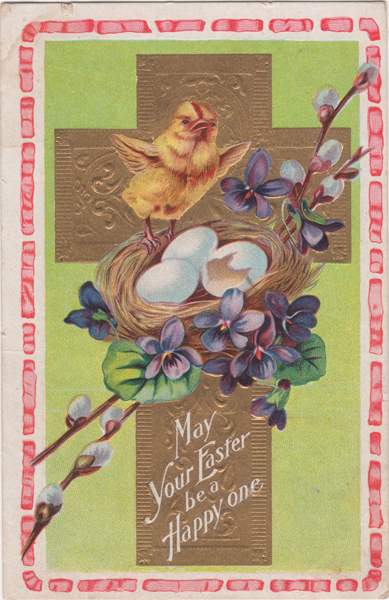 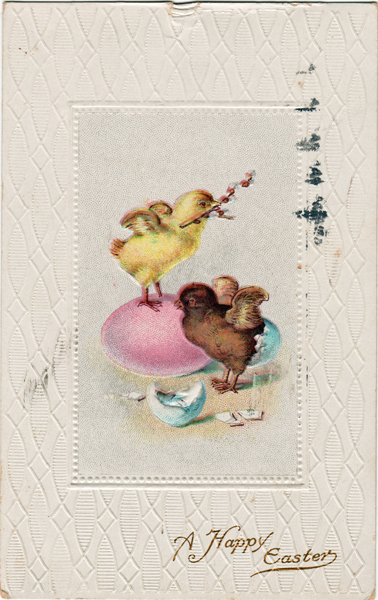 Here’s one made in France. I think this little guy looks pretty peeved, maybe it’s just a bit of Gallic attitude:

The top card is postmarked 1912 and the second one 1915. They’re both addressed to “Miss Ada May Rhodes” and they’re from her “Aunties.” The cost of the stamps? A penny.

I recently revealed to you my passion for old postcards. I started out collecting holiday and flower cards, but sometimes I come across other treasures that need to come home with me. My favorite local frame shop, owned by Kathleen Glenn, just moved into a new space. At the moving sale, while everyone else was grabbing matboard and frames, I found a box jammed full of old greeting cards and postcards that Kathleen inherited from a friend. I should have bought the whole shebang, but instead I spent a marvelous hour going through the cards one by one and picking out the most extra special.

This woman, for example!

Isn’t she wonderful? If you can’t tell from the scan, her foot is propped on a real (or maybe fake) log, but everything else behind her is a backdrop, painted to look like she’s at the edge of the sea, with huge rocks behind her. I’m totally enthralled by her steadfast gaze into the camera, her jaunty little hat, and the white bowtie around her neck.

I don’t know much about that time period –  I wonder what kind of bathing suits women wore then. From the back of the card we can tell that she was likely vacationing on Santa Catalina Island.

Unfortunately there’s no handwritten message on the back to give a clue about who she was or when she visited Santa Catalina, but at least we know that the photo was taken by noted 1900s photographer Charles Ironmonger, of Avalon California.

Do you think she was vacationing alone? Maybe she just wanted a portrait of herself as a keepsake and never intended to use it as a postcard.

In the pre-inkjet darkroom days I used to print some of my photos on black and white photo post cards that Kodak sold. The back of the paper was pre-stamped. I’ll dig some of them up and post them here next time.